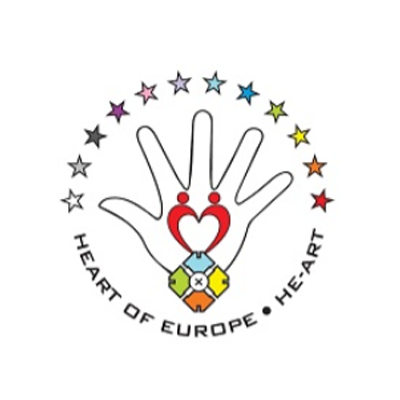 Posted at 22:23h in integration by Charlotte Meletli
0 Likes

The project HEART OF EUROPE, HE-ART, originates from the mission of GEOSS, from the central point of the heart of Slovenia. In 1981, the mission of GEOSS was formed by the leading builder of this heart: the initiator Jože Dernovšek and the author, Peter Svetik. They wanted to create a point that would ensure the connection, friendship, compassion and mutual acceptance of all people, regardless of their differences, ways of thinking and belonging, by learning and accepting the mental components of their national structure. International expansion of the project in 2012 with the International Day of Friendship – “Crow’s flight”, designed by Anka Kolenc.

Partner organizations from seven countries are involved in the project (in addition to Slovenia: Italy, France, Albania, Bulgaria, Sweden, Spain, Greece). The project is intended for international cooperation and the creation and establishment of a permanent network of “HEART POINTS” with features that emerge from the noble mission of GEOSS. Each international cultural heart point will be a creative center in which cultural events will be planned, created, executed and performed, cultural events that will promote heart values ​​such as acceptance of diversity, understanding, humanity, friendship and solidarity, hearty integration while preserving and promoting their identity , compassion and sustainable survival on Earth – at the personal, national and international level. With the network Heart of Europe, HE-ART we will create an example of cultural tourism, and in each of the partner countries, establish pulse of the heart point that will work for the town, city, for the country, and for international cooperation and integration, which has a special mark in the year of European cultural heritage. Among other things, we will also address the problems of youth, unemployment, globalization, immigration, European citizenship, Euroscepticism, stigmatization of emigrants and other problems with which our lives are interwined.

IMPLEMENTATION OF THE PROJECT HEART OF EUROPE, HE-ART

GEOSS – THE HEART OF SLOVENIA AND EUROPE

There were 102 local participants.

A brief description of the activities: All of the partners presented their countries, non-governmental organizations, municipalities, cultural heritage, national symbols, identity, and culinary arts. We gained knowledge about each other and about specific problems that affect the country of each individual partner. We learned about Euroscepticism and the importance of art, volunteering, and mutual understanding in times of crisis in order to overcome the stigmatization of immigrants. NGOs became acquainted with immigrant integration strategies. Partners also learned a lot about GEOSS as an example of good practice for friendship, for peace, and for mutual understanding. With the interactive artistic presentation of the cultural heritage of the ethnological village of Slivna, we became acquainted with an example of cultural tourism. By presenting culinary art, discovering natural heritage, history, and art, we came to identify a  way to connect with other people to prevent stigmatization. We watched the film Here Comes Jemima, which is thematically related to this, and made a draft of the project logo. We determined that we want a European citizenship in which all the identities of the European nations would be represented.

There were 104 local participants.

A brief description of the activities: We have deepened our knowledge and understanding of Larissa, of Greece, and of our host. Under the direction of the Mata-Malam Theater, we created a short film about compassion. We learned how a cultural event can promote European values, such as: mutual understanding, acceptance, compassion, friendship. Our experiences and cooperation at the Pinios River Festival revealed to us how we will design cultural and tourist events in order to point them thematically towards the purpuse of the Heart Point: to lead them, through the presentation of their own identity and cultural heritage,  towards international integration, compassion, friendship, and cooperation. In tourism development, which has not yet fully developed in Larissa, it would be an initiative for the further development of cultural tourism, which would be the foundation of Larissa’s Heart Point. We watched the film Here Comes Jemima and supporting recordings of the project collaboration in the authorship and direction of the Mata-malam Theater, and learned about various forms of art for expression in the course of an intercultural dialogue.

NATIONALITY AND EUROPEAN IDENTITY IN THE LIGHT OF ACCEPTANCE AND FRIENDSHIP

There were 107 local participants

Participants were introduced to the host country, its history and cultural heritage; the project Heart of Europe, He-art was presented at a press conference; partner organizations partook in the workshops organized by the main partner about their connection with the host country Spain; we took part in the continuation of Stefano Delia’s project “Faces of Europe”; experienced the culinary specialities of the wider Medina del Campo area; and discovered new possibilities of artistic expression for experiencing the diversity of national identities, admiration of diversities, and for compassionate connectivity. Towards this last goal we prepared an international program in the workshops for the event and participated in two festivals: “In Vino Veritas” and “Renaissance Week”. During the round table in front of La Motta castle we tested our understanding of the project Heart of Europe, He-art and refreshed our plans for further work. We finally confirmed the basic form of the logo.

ART – THE PATH TOWARDS INTERCULTURAL DIALOGUE

There were 103 local participants.

The partners got to know the Municipality of Sandanski and its natural and cultural heritage. Through discussions, guided workshops, and presentations, we experienced various forms of of art and artistic genres, which are the tools for the realization of intercultural dialogue. We established a Heart Point of Sandanski that stands at the statue od Spartacus. Heart point will receive support in official matters from the Municipality of Sandanski. Spartak’s freedom-loving Heart Point will perform the basic mission of cultural tourism. The hosting organization organized group discussions and an interesting public debate about the future of Europe, which was based around facts about Euroscepticism, and from which we concluded the importance of involvement of individual citizens for positive coexistence and development. We also contemplated the importance of cultural tourism and of acceptance and cooperation with the understanding our identity while using art.

TRANSFORMATIONAL POWER OF CULTURE COMING INTO CONTACT WITH UNEMPLOYED YOUTH

There were 103 local participants

The hosting partner presented ideas for a permanent Heart Point in Sweden, located in the outdoor museum of rural Swedish cultural heritage, near Orkelljunga. The mission of this Heart Point is the promotion of peace, friendship and cooperation, and overcoming stigmatization. We solved the worksheets on the history of Sweden and Orkelljunga, while learning about the cultural heritage of Orkelljunga. At the round table we discussed possible employment strategies for young people to promote their interest in cultural activities and to develop various competences for employment, and active volunteering. The Europe Direct speaker presented us some new aspects of the functioning of the EU. Throughout the event, we also developed a joint, international theater piece, which reflected a critical experience of the status quo that hinders a better quality of the European identity. The performance was very successful, we made an amateur film from it, and it was performed to the public on the last day. At the event conclusion, the partners also gave an evaluation of the event.

Participation: The sixth event in Italy was attended by 31 international guests from five countries: Albania: 4, Bulgaria: 7, Slovenia: 15, Greece: 1 and Spain: 4.

There were 110 local participants

With interactive professional guidance and artistic vision, the host partner presented the most important points of the cultural heritage of Rieti, the navel of Italy, regarding cultural tourism. The Secondary School in Rieti presented to us a direct example of the integration and social inclusion of youth in this process. We also learned about typical products from local companies, the best wines and food of the Sabine region.

In relation between the leading and the host partner, we received some important information in the interactive lecture on how to establish cultural tourism and how to create a common European identity, while maintaining one’s own identity with accepting and admiring diversity. At the public event we presented the Project Heart of Europe, He-art, and signed a Memorandum on Permanent and Sustainable Cooperation, which was translated into the languages of all partners. We have also accepted the approximate plan for permanent project activities and the strategy for project expansion.