Yafreisy Berenice Brown Omage arrived in Italy in 2012 from the Dominican Republic and the following year, with the help of her husband, she took over a supermarket with an attached bakery. After overcoming various difficulties, including a closing order due to some jobs not completed by the previous owners, Yafreisy has not given up, has appealed, and today its business continues to grow in terms of profit and it can count on the collaboration of 15 employees. “Being young means also being unconscious, I did not know what I was going to meet”. She has just won the Moneygram Award 2017 for youth entrepreneurship and, soon after, the absolute first prize in May. Double climb, for Yafreisy, but also double emotion. It is also proclaimed absolute winner of the MoneyGram Awards 2017 Italy. 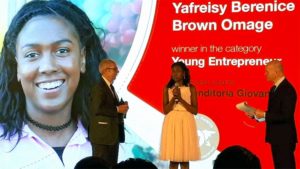