Posted at 13:16h in integration by Charlotte Meletli
0 Likes

The Youth Exchange “Encouraging Diversity” gathered 34 young people together with the objective to directly face the problem of marginalization and poverty in Europe by building their media literacy. 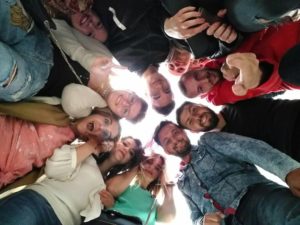 Getting the right information, thinking critically and using language appropriately in different contexts are essential skills for full integration of the European youth in the 21st century. This is also a reason of why carryed out this project, especially as marginalization of groups over society is many a times a consequent process to higher unemployment rates and immigration issues.

Through non-formal learning methods, the participants learned about the media across our countries and compared how marginalized groups are presented. Instead of merely consuming media, they had the opportunity to express their own views on society.

The youth exchange Encouraging Diversity took place in Prishtina, Kosovo and strove to center the media in the hands of youth. It brought 30 young people from 5 program and partner countries (Sweden, Macedonia, Kosovo, Albania and Turkey) enabling them to focus on how the media portrays the marginalized groups across our countries. The youth met and work all together from 13th to 21th of July, 2017 in Kosovo where through non-formal learning methods, 27 participants along with their 7 group leaders examined, analyzed and contemplated what does it mean to be representative of a marginalized group. The youth exchange offered them the space to boost their media literacy, by recognizing how media builds “the picture of the other”.

The objective of the youth exchange was to raise the voice of marginalized groups across our societies, highlighting the true obstacles they face as result of the stigma put to them by “legitimate society”, or the society living within the margins.

Together with the Center for Economic and Social Development team as the hosting organization, participants and group leaders explored the realm of Prishtina armed with backpacks filled with simple journalistic equipment to aid them share stories of struggle and success of marginalized groups. All photos, videos, interviews, audio contents or other materials to be produced with local residents in Kosovo over this week-long event were re-produced and shared in form of articles at our websites and blogs. The participants and group leaders were stimulated to start reporting on marginalized groups from their countries before the exchange so they build a portfolio of work and start gathering knowledge that they used for comparison once they were in Kosovo and mingling with their peers from the other countries.

The method of “backpack journalism” is aimed at both young people with some journalistic experience and those without. Participants succeed as long as they are eager to face the challenge of being dropped into a new environment, working creatively with a team and using simple audio/photo/video devices to interview locals.

The youth exchange aimed to promote equal citizenship for everyone across our communities, to bring awareness among the young people that there is a big difference among those living within the margins and those living on the margins of society and that this obstacle can be overcome with mutual efforts. As the participants were working in groups, each of the groups produced in the end creative article contents highlighting the struggles and successes of those living on the margin, launching in our cultural spheres true food-for-thought that strived to unravel the stereotypes.